Spain
Catalonia
Department
Town
Clear criteria
From the mountains of the Pyrenees to the sandy beaches of the Costa Brava, why not come and spend some time in Catalonia? During your campsite holiday here, come and enjoy the sea spray from the waves and the snow-capped peaks of the Pyrenees.

Having already won over some major artists such as Gaudi, Dali and Picasso, Catalonia is sure to captivate you too. A land of contrasts and diversity, this region is one of Spain's most popular for visitors. With an exceptional cultural and historical heritage, come and discover all the UNESCO-listed locations such as the highly impressive archaeological site of Tarraco and Gaudi's Sagrada Familia in Barcelona. Famous all over the world, the region's food will seduce you mouthful by mouthful. Crunch your way through some of its famous tomato bread. Typical, simple and fresh, you're guaranteed a taste sensation.

Stop off in Barcelona, "capital of modernism", and let yourself be swept away by the wild atmosphere of the city that never sleeps. In the early morning, the smells and colours of the city's fruit and vegetable market will cast you under their spell. Gerona, Lerida and Tarragona also have all sorts of surprises in store for you. Barcelona's reputation is echoed in all these other provinces.

From the tops of its mountains, Catalonia, with the Pyrenees to the north, looks spectacularly out over France and Spain. The region is also well known for its magnificent beaches and inlets, like those on the Costa Brava.

The climate is perfect for staying in a campsite in Catalonia. Winters here are mild and the summers temperate. With rain a rare phenomenon, you'll find the sun shines most of the time, which means you can enjoy this wonderful region throughout the year. 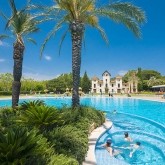