France
Normandy
Department
Town
Clear criteria
Normandy carries within it the culture of a rich past and reminders of ancient civilisations.

During your camping holiday in Normandy, you'll be able to enjoy the local dishes, long walks along the beach under the gentle sun, and satisfy your curiosity through its cultural and natural diversity.

Steeped in history, it bears the marks of the various different peoples who have trodden its soil. Its geographical location next to the English Channel gives it strategic importance. Having ravaged the coastlines of the west, the Vikings set up home here before continuing their invasion. This was the departure point from which the Norman Conquest took place in 1066, and its beaches also witnessed the allied landings of 6th June 1944 during the Second World War. The Battle of Normandy was a crucial episode of the war. Lower Normandy has a rich historical heritage that includes some important historical periods.

Normandy was a source of inspiration for some great builders, as testified to by the abbey of Mont Saint Michel, Coutances cathedral and the Château de Carrouges. The works of art known as the Bayeux tapestries were also made here. You should also stop off at Deauville, a seaside resort with an international reputation, where you can go for a stroll along its famous Promenade des Planches, before a visit to the casino. A camping holiday in Lower Normandy means enjoying the work achieved by Man through the ages in a wonderful natural environment.

Give your taste buds a treat by enjoying some of the region's culinary delights. With dishes that are rich and copious, come and enjoy some shellfish that have been caught that very morning. And for pudding, why not try that dish so typical of Normandy, la Teurgoule. Based on rice, milk and cinnamon, this can be enjoyed while you quench your thirst with a glass of cider. 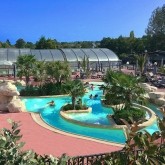 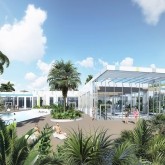