France
Poitou-Charentes
Department
Town
Clear criteria
Poitou-Charentes, which is beside the ocean as well as having some truly exceptional areas of countryside, has certainly got what it takes to win you over. Come and discover this region on a camping holiday in Poitou-Charentes!

Well-known for its eco-tourism, the region is home to some of Mother Nature's real treasures. To the west, it looks out over the ocean, a big draw for fishermen and surfers. Since it started being developed as a seaside destination in the 19th century, the Charentes coastline has all sorts of well-renowned seaside resorts along the Atlantic seaboard.

Every year, Royan, Fouras and Châtelaillon-Plage lure visitors as well as those just passing through. The draw of its islands is what marks this region out from the rest of the west coast. The Isle of Rhé and and the Isle of Oléron are becoming increasingly attractive, turning into the tourist hubs of Poitou-Charentes.

With the Marais Poitevin marshland and its hiking routes, the Atlantic coast and its beaches, the city of La Rochelle and its heritage, you'll never run out of things to do during your camping holiday in Poitou-Charentes.

Come and spend a day at the Futuroscope amusement park for a journey through time, with cutting-edge technology infrastructures. And elsewhere in the region there are Romanesque churches, eco-museums and country houses to visit, and to assist you on your travels the region has compiled various tourist trails.

It also attracts more curious visitors to its cellars in Cognac, a digestif known throughout the world. And may we suggest a glass of Pineau des Charentes followed by a plate of seafood from the region as you look out over the ocean? 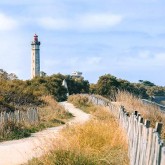