Spain
Spain's Basque region
Gipuzkoa
San Sebastian
Clear criteria
Come and stay in our campsites close to San Sebastian and explore the beauty of the Pays Basque and this seaside resort which is known as the pearl of the Cantabrian.

Saint Sebastien, Donostia in Basque and San Sebastián in Spanish, is a charming town in northern Spain looking out to the sea, in the heart of the Pays Basque. It was King Sancho VI of Navarra who was responsible for the formation of the town, he having wanted to turn the harbour into a point from which his kingdom could access the sea. Close to France and on St James' Way, San Sebastian quickly became a major seaside resort beside the Cantabrian sea. European capital of culture in 2016, it is also a dream destination for those keen on cultural tourism. When you enjoy a campsite stay in San Sebastian, you'll discover its various monuments too, including the cathedral of Le Bon Pasteur, the basilica of Sainte Marie, the Palais de Miramar, the Palais Kursaal and Place de la Constitution, and you'll be able to wander up and down the pretty streets of its historic central district.

Enjoying a camping holiday in San Sebastian also means taking advantage of its superb beaches, all of which provide totally different types of atmosphere! Come and enjoy a peaceful time on the beach at Ondarreta, where fishing for crabs and playing around in the waves will take centre stage as part of your family holiday at the beach. And the more brave and energetic among you will be able to swim to the island of Santa Clara, which lies 400 metres offshore.

And you should also stop off at the beach of la Concha, well-known for its fantastic views of the bay, protected by the mountains of Igeldo and Urgull and by the island of Santa Clara.

And finally, for those who enjoy a bit of surfing and excitement, head for the beach of la Zurriola, with its dynamic and youthful atmosphere due to the surfing which takes place here.

But San Sebastian is also well known for its great food. You won't be able to go camping in San Sebastian without trying its famous pintxos (a regional type of tapas), which is at the core of the cuisine of San Sebastian. Originally these were just slices of bread with a garnish on top, but they have become increasingly complex, so you should allow yourself a little session trying them in the various bars in town. 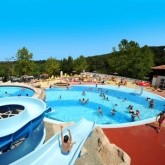