France
Aquitaine
Pyrénées Atlantiques
Saint-Jean-de-Luz
Clear criteria
Once a haunt of Basques corsairs, Saint-Jean-de-Luz is a landmark town on the Basque coast, just a few miles from Spain. If you are staying at a campsite in the region, make time to discover its fishing harbour and the town that remains lively all year round. 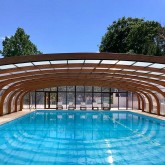 Do you know Saint-Jean-de-Luz?

Saint-Jean-de-Luz is a highly recommended destination benefiting from an ideal situation between the ocean and the Pyrenees. It boasts a wealth of assets, the outcome of a rich history materialised in the architectural heritage and outstanding environment. First you’ll be won over by the charm of the characteristic red, white and green half-timbered Basque houses in the town centre and the peaceful bay overlooking a sheltered harbour that is hugely popular with bathers.

There are plenty of remarkable fishing ports in France and on the Atlantic, but the port of Saint-Jean-de-Luz is simply outstanding. Its colourful trawlers are still anchored in the days of privateering and whaling. Today, the small-scale fishing industry is centred on tuna, sardines, line hake and anchovies, which go on display ready for sale on the fishmongers’ stalls at the town market. From April to October, you can take a boat trip to explore the Basque coastline.

The local gastronomy is also highly regarded, and not only for the fish! If we say mouchous and kaougas, do you know what we mean? Behind these odd-sounding names are the well-known sweet treats from Maison Pariès. The delicious macaroons made by Monsieur Adam are also the talk of the town! And of course, there are the other Basque country specialities, such as stuffed chipirons (or squid), zikiro (leg of lamb on the spit), koskera-style hake, and piperade... And for cheese and dessert, try the mouth-watering Ossau-iraty and Basque cake!

When you're in Saint-Jean-de-Luz, take the time to visit the town’s emblematic sites. The house of Louis XIV, a 17th-century royal residence, takes you back to the time of the rich ship-owning families of Saint-Jean-de-Luz as you explore their apartments, including the king's grand bedroom and a splendid gallery overlooking the port. Another house, a listed historical monument built on the edge of the harbour, is even more imposing than that of the Sun King – the house of Maria Theresa, the Infanta of Spain, his wife.

Once you’ve wandered around the historic heart of the city, turn your attention to the surroundings areas which are just as interesting. On one side of the bay is the magnificent Socoa Fort, consolidated by Vauban in the 17th century and a reminder of the former Franco-Spanish rivalry and, on the other side, the Sainte-Barbe headland, ideal for nature walks and for admiring the extraordinary vista of the wild Basque coast.

A look back at history and we are reminded of the prominence of Saint-Jean-de-Luz in France’s past. Louis XIV and the Spanish Infanta Maria Theresa were married in this city on 9 June 1660, formalising the treaty between France and Spain. The house of Louis XIV can be visited, but still belongs to the descendants of shipowner Joannis de Lohobiague who had it built.

Quieter than Biarritz, the seaside resort of Saint-Jean-de-Luz is sure to appeal with its beaches and lively town centre steeped in Basque charm. Our campsite at Biarritz is just a 20-minute drive away from here. Why not come for lunch or dinner? The town has a vast choice of restaurants, with something for everyone. La Vielle Auberge serves up tasty traditional Basque dishes such as its Axoa-style veal, roast octopus with preserved lemons, and Kintoa pork chop. We should also mention the Xaya La Cave Gourmande restaurant and its mouth-watering appetisers, a real gastronomic experience!

During the Whitsun weekend in May, be sure not to miss the traditional Casetas festival in Saint-Jean-de-Luz. Its shows, flamenco lessons and numerous other attractions create a wonderful festive atmosphere across the town, bringing enjoyment to the locals (known as Donibane in Basque) and holidaymakers alike.