France
Brittany
Morbihan
Town
Clear criteria
Come and enjoy the delights of the coastal landscapes and unusual towns during your camping holidays in Morbihan.

Set off for a camping holiday in southern Brittany and discover the rich heritage of Morbihan. Enjoy the delights of its fantastic coastal landscapes, prehistoric locations and variety of unusual towns.

Among the must-sees of Morbihan are the Carnac Stones, which comprise the world's largest collection of megalithic stones, stretching for a distance of around 4 km. You will be amazed by the different alignments of menhirs! One legend has it that this is an army of stones, another that it is a place of worship, but whatever the reason, this is still a very mysterious place.

You and your family should then the head off to the village of Poul Fétan to find out about the day-to-day lives of country people during the 19th century. This fully restored village tells the story of customs and traditions on the farms of yesteryear in a fun yet educational way, through shows and live entertainment.

For those keen on watersports or long relaxing afternoons on the beach, come and have a look around Ile de Groix. A 45 minute boat trip will take you to Port Tudy. As Ile de Groix is especially good for cycling, you have the option of just going round the island by bike.

There are lots of other islands in Morbihan which are also worth visiting however, including Ile aux Moines, which is the largest island in the Golfe du Morbihan, and just 5 min away by boat from the mainland lie the Glénan islands, which, amid the turquoise water and white sand beaches, has a tropical appearance.

People who enjoy old buildings and unusual towns, meanwhile, should head for the walled town of Concarneau, known as the "ville close" because of the walls surrounding it. In the upper parts of the town, come and see the Château de Keriolet, originally a manor house dating back to the 13th century, which has been transformed over the years to end up as this splendid castle; a wonderful place to visit!

Art lovers should head for Pont-Aven, which is known as the "cité des peintres" (town of the artists) as so many artists have passed through to paint here, including Paul Gauguin. A market town well-known for its mills and its harbour, you'll also love wandering through its alleyways for a day's shopping. 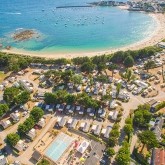 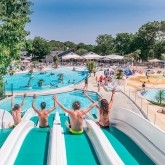 Baden, Morbihan
Discover the campsite
The Yelloh! Village campsites nearby 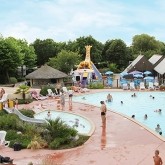 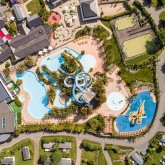 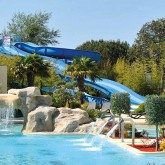 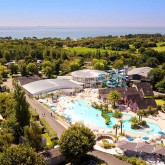 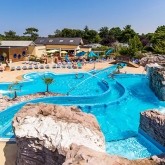 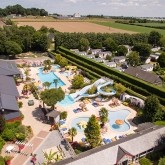