France
Midi - Pyrénées
Aveyron
Laissac
Clear criteria
Come and discover the various highlights of the Laissac region when you come camping in Laissac, and don't forget to visit the major tourist sites in the Aveyron located nearby.

Come and discover the Laissac region when you come on a camping holiday in Laissac. Laissac is a small village in the heart of the Aveyron, just 20 km from Rodez and part of the canton of Laissac. Right beside the Forest of Les Palanges and alongside the Causse de Séverac (a limestone plateau in the south of the central massif central), the canton of Laissac has as many different facets and landscapes as it does villages, of which there are 8 in all: Bertholène, Coussergues, Cruejouls, Gaillac d’Aveyron, Laissac, Palmas, Sévérac l’Eglise and Vimenet.

Famous for its livestock market (both sheep and cattle) which is ranked second in France and first for the South of France, Laissac's economy is mainly built on farming and livestock breeding. So when you come on a camping holiday in Laissac, you'll be able to experience the weekly markets here, which take place on Tuesdays.

Going on a camping holiday in Laissac also means holidays right up close to nature! The hills and wide open spaces surrounding Laissac are perfect for enjoying various outdoor activities. And for people who are interested in history and monuments, you can make the most of your camping holiday in Laissac by visiting its historic centre, featuring its Rességuier tower, built during the 16th century, and its 19th century church. You should also visit Maquefabes, a former mill not far from the town centre, which was converted into a château in 1656, and the Château des Bourines, in Bertholène, the estate of which is surrounded by various farm buildings and items which are still operational (pigsty, cart house, troughs, slaughterhouse etc.)

The town of Laissac, which is just a few kilometres from Rodez, is an opportunity to visit the major tourist sites of the Aveyron, which include the viaduct of Millau, the Gorges du Tarn, the Aubrac, the mountains and lakes of Lévézou etc. And foodies will be kept busy too, as Laissac is home to various Aveyron specialities including the famous aligot, as well as tripous, farçous, and fouace. 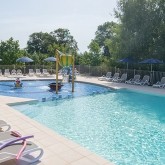 Rodez, Aveyron
Discover the campsite
The Yelloh! Village campsites nearby 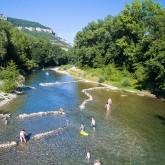